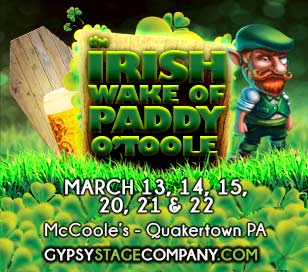 "You know when I was a kid, if I hurt my ankle playing outside, my mom would just throw a bag of peas on it."

The crowd let out a few chuckles, but the laughs became fewer as the speaker’s words turned stark.

"But now, we as a society seek instant gratification, instant relief, and we turn to opioids to find it."

The speaker was Congressman Brian Fitzpatrick, who joined the Doylestown Rotary Club’s early morning meeting on Tuesday, March 27, to talk about the key issues he’s been focusing on throughout his term.

Brian Fitzpatrick is the incumbent for the eighth district, which after court ordered redistricting, is now the first district.

The eighth district was a swing district, meaning it could go either democrat or republican. However now the first district includes more democratic territory, making Congressman Fitzpatrick’s re-election that much more competitive.

Currently, Fitzpatrick has his party’s backing for the primary election taking place in May, but he’s also facing off against fellow republican Dean Malik.

As for the Democrats, three have emerged to try and unseat congressman Fitzpatrick. Rachel Reddick, Steve Bacher, and Scott Wallace. Wallace has the Democratic Party’s backing.

At the early Tuesday morning meeting, Congressman Fitzpatrick was introduced incorrectly by his brother’s name but took it in stride with a giggle saying, "It happens more often than you think, I used to it by now."

The congressman met the small but eager crowd to speak about what he’s mainly been focusing on throughout his term as congressional representative for the eighth district. As his term dwindles down and he faces re-election, Fitzpatrick told the crowd he’s still standing firm on three issues; the opioid epidemic, school safety, and cyber security.

Congressman Fitzpatrick then reminded the crowd that over the weekend three Pennsbury graduates had lost their lives to opioid addiction.

Congressman Fitzpatrick admitted, "This isn’t an easy battle, there’s people that aren’t interested in financing the solution, they don’t want to make the investment."

Fitzpatrick then went on to say, "But I don’t think money should be an issue, you can’t put a cost on human life."

As to how Fitzpatrick wants to "stop the bleeding" with the opioid epidemic, he said he wants to start with the education our schools provide on the matter of drugs, drug addiction, and mental health.

"Let’s start early, we don’t spend enough time educating about mental health and warning our children just how dangerous these prescription drugs are."

"There’s a stigma around here that’s attached to drugs like heroin, but the minute these kids can’t afford to get their prescription pills, they turn to the cheaper option. Even though kids think they’ll never sink that low, we still need to educate them in case they ever do."

Fitzpatrick also said police are overwhelmed by the epidemic, and in order to help the problem they must be provided with the proper tools.

"I was visiting the Bensalem police department the other day and a drug bust they just did wiped out almost all of their already tight budget," Fitzpatrick said.

Fitzpatrick, who serves on the House Committee of Homeland Security and was also a special agent in the FBI that fought political corruption and helped in global counterterrorism efforts, warned the crowd about breaches in cyber security saying, "Cyber security is by far the greatest security risk we face."

"In the age of terrorism where physical acts of terror are being committed, people downplay the harshness of cyber security, but don’t be fooled, a breech on cyber security can cut a democracy off at its knees and destroy an economy." Fitzpatrick warned.

Fitzpatrick then ended with school safety, reminding the crowd that "there is no higher priority we have as parents than to protect our kids."

"My personal view is that if we don’t talk, then we can’t fix anything. That’s why I’m part of the Problem Solvers Caucus."

The Problem Solvers caucus is a bipartisan group in the U.S. House of Representatives with about 48 members that all specialize in coming up with bipartisan solutions on key policy issues.

"No one party has a monopoly in good ideas, we need to listen to each other in order to act and make change. We need to come up with the best solution regardless of party affiliation."

Despite expressing how we need to talk about the issue, Fitzpatrick didn’t mention the March for Life that had taken place this past weekend.

When audience members asked how we as citizens can help, Fitzpatrick urged them to visit his office in D.C., saying "I’d much rather see you guys down there than the people I normally have to see."

The crowd, delighted with his invitation, then wrapped up the meeting and gifted their guest speaker of the morning with a Mercer Tile with the club’s symbol on it. The crowd thanked the congressman, and the meeting was adjourned.